I carry all the names I’m given, Arroniz Gallery

I carry all the names I’m given, Arroniz Gallery

“Perhaps the world is folded in two” (1)

Thinking about the action of unfolding takes us simultaneously to the present and the past. Something had to happen to be unveiled or in vain rewound. In photography, folding implies an irremediable aggression or rupture against the materiality of the medium, which generally appears as a smooth, continuous and two-dimensional surface. However, photography appears and is, due to the transition between its opposites —negative and positive, visible and invisible, absence and presence, real and fiction, digital and analog, liquid and solid, fixity and movement, etc—, a paradox that is not unrelated to the practice of Menchelli, which focuses on expanding the language and the various conceptions of the medium by means of abstraction and the revision of its own apparatus. In this series, the artist disrupts the photographic object materially and discursively, creating hybrids that respond to an interaction between photography and other cultural practices.

There is a conscious distance from the massive and immediate use of photography and the image in Menchelli’s practice. Most of her works come from analogous methodologies used mainly during the invention of the medium, which entail a prolonged time and an almost artisanal approach, intertwined with scientific knowledge. The pieces in the series I carry all the names I’m given (1), alludes to the basis of photography: the recording of light on a sensitive material. Here, the artist folds and unfolds the color photosensitive paper in the darkroom and exposes it to different temporalities of light, which on its way to its final destination passes through a color filter. It is worth mentioning that the color we see in the final image is not that of the filter, it is its opposite. Therefore, it is the same photographic paper that provides the abstract forms that we see registered in the piece. The sheet works as a support and tool for creating its own image. As in origami, the artist assembles and disassembles the paper, generating the various figures and nuances that we see. Each fold and visible line demarcates an exposure of light and a different color filter. The work is made up of fragments, unique and autonomous frames. Multiple exposures in a single image. Material and visual interruptions. Unlike conventional photography, this form of production does not allow a delicate and exact handling of the creation processes. In the darkroom, Menchelli sees the image she is creating only at the moment of development and fixation, not before. Photography is created blindly, from an almost elusive interaction between memory and the sense of touch. Depending on the scale of the paper, the task of bringing the work into the world becomes an exercise that involves the whole body, a complicated and exhaustive exchange between the artist and the photograph.

Fragmentation is natural to the medium of photography, it is built from the selection and omission that comes from framing. It rarely presents itself as multiple, much less as transparent, presenting the traces and marks of its own production. Generating these creases and breaks forces it to lose its two-dimensional state, rectangular boundary, and pristine character. Instead, the photograph becomes a haptic object, full of gestures, details and errors. It goes against its reproducible nature, and it becomes unique. That error makes it human, or rather, that error is the visible record of the human trace. Photography in its most material but elusive character, concrete but indefinable, rigorous but imperfect, favors the deconstruction of its own system and expected functionality. At the same time, it alludes to one of the fundamental roles of photography: to be another form of visual perception beyond the possibilities of the human eye. Margaret Iversen citing Rosalind Krauss explains the relationship between photography and the fragment in the surrealist movement as a hybrid model, taking montage as writing: “The spacing makes it clear that we are not looking at reality, but at the world infested with interpretations of meanings” (2). Photography as writing through montage enables the multiple. The editorial and photographic media are linked by memory. The evolution of humanity is tied to remembering, to having a faithful vestige of the past. When we went from orality to the invention of writing, the latter allowed for the first time “[…] to lengthen the life of memory by fixing words” (3) and therefore ideas. Photography does not freeze time, it records a time, and in its most basic version it allows another type of data, apparently more faithful and objective than words. We seek at all costs to prolong life in general, even more, “historically the materials and substances of art have been chosen for their longevity rather than for their meaning” (4).

Unlike how the works operate in the editorial environment, here they take on different scales, always in relation to the human body. Photograms are experienced beyond the physical limits of the book or the photographic paper, leaving aside their individual quality to dialogue with the other pieces, with the space and the support that hold them; they merge with other existing elements around them. Added to the fact that “In visual perception, color is almost never as it really is —as it physically is” (5), and thanks to the sculptural folds of the pieces, the color in the frames is conditioned to the architecture, the shades and intensities vary according to the spatial context and lighting external to them. In the darkroom, Menchelli had to project or imagine color in its sculptural version, generating a tension between the trace of the photographic ghost and the present from which the work is exhibited and observed, where it is finally fixed and complete. This combination of elements makes the viewer’s reading path less predictable, since they are works whose edges are difficult to define. There is a dialogue in the interaction of the fragments, between the beginning and the end of each fold, line or limit, but there is also a break in visual sequentiality; generating something else, a passage between the frame and the object, the image and the sculpture. After all, repetition is visibility and certainty. Here the irruption and the difference make it impossible to trace a path. 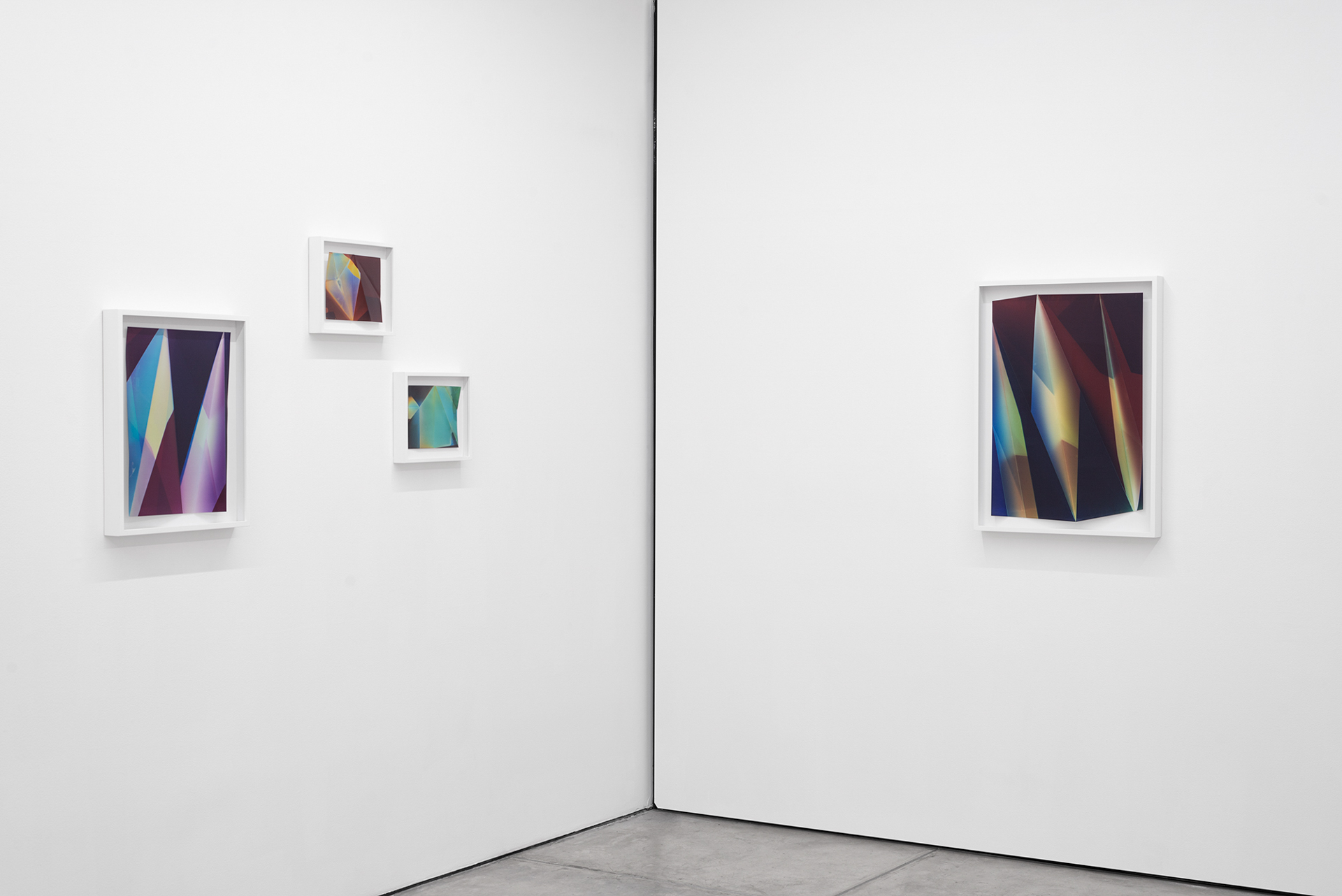 (2) Excerpt from the poem “A Piece of Writing that won me $200 in eighth grade” written by the artist and writer Manuel Arturo Abreu.